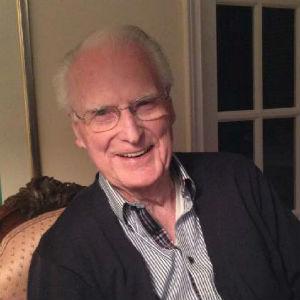 He was born June 11, 1928, near Villeneuve, Alberta, to Angus and Laura (née MacDonald) and grew up on the farm, learning to love wild horses and solving problems. He left school after Grade 10 and went to stack wood with Haywood Lumber in Edmonton before moving to the company’s sales team, where he used his belief in building relationships to excel.

In 1950, he met Rose Marie (Tilly) Gosselin, a young soprano with the Edmonton Opera Association and by the time they had two sons, they had sold a car won in a lottery to buy their first house. They renovated it during the evenings and sold it, doing the same twice more before finally building the house they wanted in Laurier Heights.

No sooner did they finish than Tony was promoted to a sales manager’s job in Vancouver, and in 1975 to Toronto, where he quickly became the company’s president, nicknamed the Silver Fox for his thick head of early grey hair and his strategic ability to work with people.

At 49, he had a quadruple bypass and was told he had at best 10 more years. By the time he left the hospital, he knew everyone on the ward, a pattern he continued as he continued to defy the doctors’ expectations. Quick to smile, he was easy to know, a keen and sympathetic listener who believed in the future and the power of relationships. He nursed Tilly through two bouts of cancer, and moved back to Vancouver after she died.

At 82, when he finally had to give up driving, he rode the buses, learning the names of all the drivers and many of the regular passengers, and it wasn’t unusual for his sons to get an email from a stranger Tony had befriended, with the subject line: “I met your dad on the bus’’. He also loved the less-wild ponies at the race track, developing a complex, pre-computer handicapping system that he took great pleasure in teaching to his younger friends. The future was an open place of possibility.

He is survived by his sister Mary Jones; his brother Fr. Don OFM; sister-in-law Lorraine; sons Rick (Nan MacDonald) and Gary (Colleen Dragan); granddaughters Megan and Jennifer; and great-grandchildren Alex, Conner, Addison and Liam. He was predeceased by his brother Mark and sister Jessie Wendt. The Mass of Christian Burial will take place in the chapel at Connelly-McKinley, 9 Muir Drive, St. Albert, Alberta, at 10:30AM, September 8, 2018. There will be a reception at Connelly-McKinley. Tony will be buried in the family plot in St. Albert.