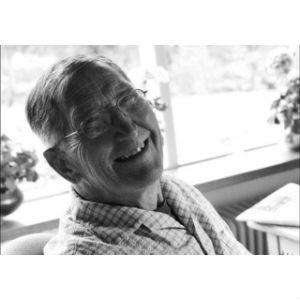 Even when he was dealt a lousy bridge hand, Anker Gram could turn it into a win.

Raised on a farm in the south of Denmark, the youngest of six. His first test came when Germany invaded Denmark and he joined the resistance.

Two years and many adventures later, he was arrested, beaten, interrogated and jailed, but he was damned if he was going to give them anything, even when brought face to face with a comrade who gave him up. Though the cards were bad, Anker won that game by hanging on to his humanity.

After the war, he became an engineer and immigrated to Canada where he met Ruth and raised five children. But first, he stood up to McCarthyism. Anker had applied to immigrate to the US, but when asked of any association with communists, he declared them his comrades against Nazism. Refused entry, Canada became his home, an eventuality he never regretted.

He made friends easily, distinguished himself in his work, co-founded the North Shore Unitarian Church and an alternative high school. In the mid 70s, he designed the first portable natural gas liquefier and converted gas-powered cars to pollution-free LNG, decades before we knew the term carbon footprint.

He followed his own path, spelled horse with a PH, danced with every lady in the room, mentored dozens, touched everyone he met.

His lack of facility with the English language was more than made up for with his sense of humour and genuine interest in people, ideas and current events.

He loved margaritas in Mexico, pickled herring at lunch, railing against US foreign policy, debating anything, wine with dinner, a problem to solve, moderation in everything. Especially, he loved to be with his family.

He disliked small talk, mangled cheese, the cold, religious dogma and being wrong, though he could change his mind.

He was self-deprecating, had great hair, rode his bike to work into his 70s, worked into his late 80s.

He used to joke that Ruth would get pregnant just passing him on the stairs, but his kids filled him with pride. In turn, they learned about the world when he and Ruth offered shelter to Danish cousins, draft dodgers, refugees, foster kids and foreign students. Their parties were legendary, their dinner table always had room for one or two more. He was 62 when she died.

His 27-year second marriage to Elizabeth renewed his zest for life. They went on wonderful adventures — rafting the Tatshenshini River, cycling in South Africa, and finally wintering in Zihuatanejo where the bridge games would go on all day. Summers found them on Denman Island on a gorgeous beach-front property that could accommodate the growing Gram brood– a blended family of seven kids, their spouses and 15 grandchildren. Amidst them he would often wonder what he had done to deserve all this.

In 2012, Anker was honored with a lifetime achievement award from the Professional Engineers Association which recognized his contribution to carbon-neutral transportation and his determination to carry on even when few in the field cared.

His only regret is that his kids never mastered bridge.

On February 8, at age 91, Anker, the last of his siblings, played his final card dying with dignity at the North Shore Hospice under the care of Dr. Paul Sugar. His wife Elizabeth; kids Margo (Kevin), Karen (Brian), Ellen Shumiatcher (Cal), Claire, and Niels (Stephanie); stepkids Dori Dudley and Tom Dudley (Dausha); and all his grand-children feel privileged to be his family. We wonder what we did to deserve him.

There will be a memorial service at 7 pm Friday February 23 at the North Shore Unitarian Church, 350 Mathers Ave, West Van. In lieu of flowers, please send a donation to the Paul Sugar Palliative Support Foundation.