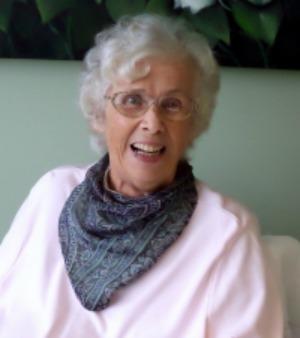 Elizabeth was born and raised in St. John’s Newfoundland in the midst of a family of smart, beautiful, hardworking women.   Her Dad, Captain Walter Drodge, served in the Merchant Marine and was at sea for most of WW2.  She faced health challenges at birth and these would continue throughout her life, challenging her but not defeating her.

Elizabeth came to Vancouver for a year when she was a student. She studied at Prince of Wales High School and enjoyed dressing in a long green kilt, with a crisp white blouse. Elizabeth adored her French teacher and even attended a dance with a friend. She seemed to thrive on the West Coast and perhaps it was this year away from Newfoundland that inspired her Mother, Dora and Grandfather Hancock to move to Victoria a few years later.

There, Elizabeth graduated from the Institute of Adult Studies in Victoria, now Camosun College, where she made some life – long friends including Joanne Turner of Sooke, B.C.

Despite physical handicaps Betsy worked as a volunteer both with Goodwill Industries and with British Columbia Forest Products. In 1966 along with her mom, Dora, she moved to Vancouver, and eventually West Vancouver. While living in Vancouver she loved to take care of her nieces and nephews. In particular she like to take them in the stroller to the ice-cream parlour.

Betsy loved music especially singing. For some years she was a member of the choir at St. James United Church on West 10th Avenue in Vancouver.  After their move to West Vancouver Elizabeth would often be seen on Marine Drive pushing her mother’s wheelchair for coffee or to the seawall. They enjoyed life with regular jaunts to the PNE and to surrounding restaurants.  After her mother’s Dora’s death, Betsy became an active member of a number of West Vancouver Senior’s Groups.

Elizabeth loved her social afternoons and enjoyed the people around her.

She lived in the moment accepting of all that life brought to her. She was devoted to her mother throughout her life, and adored her sisters and their families.

She will be missed.