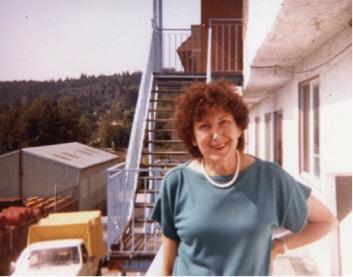 (Main Photo: Grace in the 1980s on location in Gibsons, B.C. with the CBC Vancouver-produced
Network television series “The Beachcombers”.)

With deep sadness, this brings the news that Grace Sigmund passed away on December 31,
2021. At age 94, Grace attained her wish to remain in the apartment she loved, living
independently until December 16 th when she was taken to St. Paul’s Hospital. As it became more
difficult for Grace to walk a long way, her world narrowed, but she continued almost daily to go
out to do her bit of shopping or to have a coffee at Tim Horton’s. A favourite treat was having
lunch with a friend at the Sylvia Hotel.
Grace was born on August 1, 1927 in Twickenham, Middlesex, England to Anthony Joseph
Sigmund and Harriet Laurie Sigmund (nee Keat). With her parents and younger brother Brian,
Grace emigrated to Canada in 1947. Shortly thereafter she joined the Royal Canadian Air Force
and achieved the rank of Leading Air Woman during her service.

Following her RCAF service, Grace embarked on a civilian career in 1950 as a Secretary in
Vancouver with the Royal Bank branch at the corner of Granville and Hastings Streets and later
the same year left to accept a Secretarial position with the University of British Columbia where
she remained until 1953.

She moved to Montreal and worked at the Aluminum Company of Canada for a year before
returning to Vancouver and joining staff of the Vancouver Art Gallery as an Executive Secretary
and taking on the additional role of Business Manager. Grace held that position until 1960 when
she was headhunted to join staff of the new Everson Museum of Art in Syracuse, New York as
the Executive Secretary. The press release issued to announce Grace’s appointment said in part,
“…we invited Miss Sigmund to join the Museum staff as Executive Secretary to assist in the
programme planning and development, preliminary to the realization of a new art museum for
the city of Syracuse”. 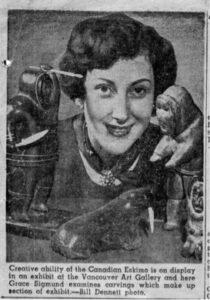 Creative ability of the Canadian Eskimo is on display in an exhibit at the Vancouver Art Gallery and here Grace Sigmund examines carvings which make up section of exhibit.

Grace gets top job at museum

Miss Grace Sigmund, a former Twickenham girl who emigrated to Canada in 1947, has been appointed executive secretary of the Everson Museum of Art in Syracuse, a town in New York state, U.S.A.

The new appointment, considered important in art circles, was made mainly because of her English education and background.

Miss Sigmund is the daughter of Mr. and Mrs. A. J. Sigmund, formerly of Chudleigh Road, Twickenham, now living in Vancouver.

She was educated at the St. Mary’s school, Twickenham and at Twickenham country school.

Her father, born in Richmond, was a pupil at the former Richmond county school for boys.

In 1962 Grace returned home to Vancouver and joined the staff of the Canadian Broadcasting Corporation in Vancouver as Secretary to the Regional Director for the Province of B.C., Ken Caple. She continued in that role under subsequent Regional Directors Robert McGall and Len Lauk and in the early 1980s transferred to the TV Programming Department as a Costing Clerk assigned to two seasons of The Beachcombers series on location in Gibsons, B.C. (her favourite job in her lengthy CBC career) before being permanently assigned to TV News where she was often upgraded to the role of Unit Manager. Grace retired from CBC in 1990 and immediately embarked on a new path as a Travel Co-Ordinator, organizing several excursions to Great Britain and Ireland over the next several years before retiring permanently from the work force.Throughout her life, Grace embraced many interests. She loved the creativity of knitting andcrocheting and spun and dyed her own wool on a loom at home from which she then made beautiful sweaters, dresses and coats. She took extensive writing classes with the ambition of writing books and she was an enthusiastic traveller, returning often to the U.K., enjoying Canada and the United States including Hawaii, and taking a very special trip on the Orient Express through Europe and another to Beijing, China where she delightedly stayed at the Grace Hotel. Grace was a devotee of classical music, especially in concert performances, and she was also a great fan of the Rock ‘N Roll music of the 1960s. She enjoyed live theatre performances and was a great lover of books particularly pertaining to history and current affairs. The Economist was her favourite magazine. On television, her favourite viewing included British dramas such as Poirot, Brideshead Revisited and other productions presented by Masterpiece Theatre as well as Sherlock with her favourite actor Benedict Cumberpatch, and documentaries on World Wars I and II, British military history and regimental musical performances, the Royal family, live coverage of Royal occasions and world history.

Grace was predeceased by her parents and brother. At her request, there will be no service and cremation has taken place.