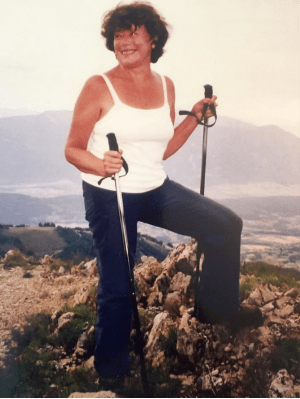 With deepest sadness, this brings the news that Serafine Crawley passed away on June 5, 2020 ending a brief and fierce battle against a very aggressive cancer.

Ida Serafine was born to Siegfried and Anna Kerschbaumer and raised in Arriach, Austria. The rugged beauty of her homeland fostered a love of the outdoors from an early age and hiking was a passion she embraced throughout her life. As a young woman, she travelled to New Zealand to visit her brothers who had settled there, and she too made it her home for a time before moving to Australia. There she met her future husband, Terry Crawley. They married and in 1972 emigrated to Canada, after which Vancouver became her permanent home.

In 1975, Serafine joined the staff of CBC Vancouver in the Finance Department and was assigned to financial reporting for television programming including TV News. In succeeding years she undertook responsibility for cataloguing and maintaining the records for Capital Assets for the B.C. Region on top of her regular duties.  In 1997 Serafine transferred to Audience Relations (Communications Department) where she remained until her retirement from CBC in 2002.  She was an EAP (Employee Assistance Program) volunteer for ten years during her CBC career and found that volunteering greatly enriched her life.

Retiring from CBC was not the end of Serafine’s working life; she was in the work force for another seven years with the Bear Smart Community Program in West Vancouver and with the District of North Vancouver, until her second retirement in 2009.

In addition to her ardent love of hiking, Serafine delighted in working out at the gym, taking long power walks, practicing and teaching Tai Chi and took great pride in achieving her Brown Belt in Karate.  She cultivated a variety of friendships and strongly valued them all. Serafine was admired for her straightforward sincerity, genuine kindness, and adventurous spirit.  She derived great pleasure from attending musical and theatrical performances, was a consummate hostess with a culinary expertise that made any gathering she catered, a rare treat for her guests.

She found great satisfaction in pursuing her many and varied interests, especially as a volunteer at the Vancouver Aquarium and West End Community Centre. She also served as Treasurer of both the CBC 20 Year Association and the British Columbia and Yukon Region CBC Pensioners’ National Association, as President of the Sherlock Holmes Club of Vancouver and as a member of the Rolls Royce Club. As an avid member of a local walking club, she organized a tour of Vancouver historical sites, including a questionnaire for participants to engage in along the way.  Despite a hesitation in writing material because English was her second language, she contributed to club newsletters with stories, quizzes and crossword puzzles.

Travel excited Serafine and the more adventure to new places and new experiences involved, the more she loved it. Jungles, mountains, forests, deserts and beaches were equally fascinating to her and the end of one trip often led to talk of planning another. Serafine’s travels included numerous and diverse trips with her niece Isabella exploring North America and Europe together, creating irreplaceable memories.

Serafine grew up in a large family with 3 sisters and 7 brothers and travelled home regularly to be with them. She and the family always looked forward to her next visit home and for her to get a good feed of her favourite Austrian dishes. Her sister Veronika always enjoyed their many beautiful Christmases together with all the family. Serafine treasured her relationships with her nieces and nephews and spoke often of them and how she valued their shared memories together.

At Serafine’s request, there will be no funeral service or Celebration of Life. A donation to a charity in her memory would be welcome. Serafine was a supporter of The Knowledge Network, Cancer Research (BC Cancer Foundation) and Barclay Manor (West End Seniors’ Network Society).