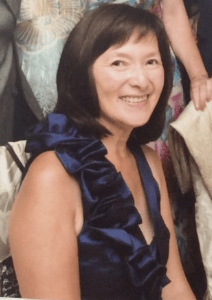 Jeanette Mende passed away peacefully at the age of 66 on August 28, 2020.
She was born in Kelowna, the second child of Akio and Blanche Yoshiko Mende
where she grew up living and working in the family orchards at Winfield, BC.
After studying Tourism at Humber College, she lived in Kelowna, Toronto,
Montreal and Vancouver. She worked with the RCMP, followed by a long career
with the Business Development Bank of Canada.

Jeanette met her soulmate Bob Snowdon in 1996 while ballroom dancing at the
Century Plaza Hotel in Vancouver. Together they enjoyed a passion for
travelling and the outdoors.

Jeanette faced health challenges with bravery and grace. She managed an
autoimmune disease (NMO) and battled cancer in her final 2 years. Jeanette will
always be remembered for her amazing spirit and beautiful smile. She will be
dearly missed.

Per Jeanette’s wishes, private family services were held at KORU Cremation &
Burial in Vancouver and Lakeview Memorial Gardens in Kelowna where
Jeanette now rests next to her parents. A Celebration of Life will be held
sometime next year.

Donations can be made in Jeanette’s honour to the Canadian Cancer
Foundation and the Neuro Myelitis Optica clinic at the University of British
Columbia.