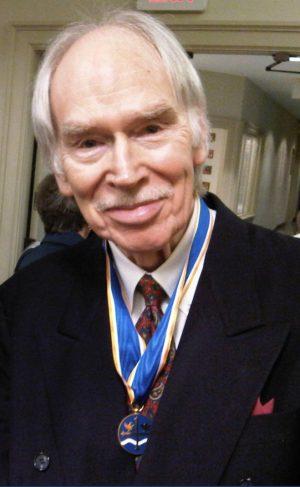 We celebrate the life of Lyndon, beloved to all who knew him. He passed away peacefully at home, with family present, on August 21, 2020. He will be deeply missed. Although we are profoundly sad at his loss, we give thanks for his long and happy life and the precious time we shared with him.

Predeceased by his wife Marion and daughter Mala (Don), he leaves rich memories for his children Deborah (Dave), Christopher (Kim) and Peter (Susan), grandchildren Emily (Trish), Mike (Jocelyn), Helen (Darren) and Alexandra, and greatgrandchildren Finn, Jack, Molly and Xavier. Sharing in the memories are his sister Tanyss (Brian), nieces Jacqueline (David), Christine (James), nephew Ben (Monika) and great-nephew Jacob. Lyndon was enormously proud of his family and generous in his praise of all of them.

Lyndon began his life in Moose Jaw, Saskatchewan, being born on December 31: New Year’s Eve. When festivities rang out around the world, he often remarked that the whole world was celebrating his birthday.

Lyndon began working at the Moose Jaw radio station CHAB at the tender age of 15, becoming, we believe, the world’s youngest disc jockey. His enormous talent and creativity led him to a lifetime of wonderful career accomplishments.

In his own words, he described himself as a “media gypsy” who had “spent vast amounts of time in radio, television, newspapers, magazines, advertising, public relations, film and live performance.” Although he was extremely humble about his successes in all that he undertook, his children were keenly aware of the breadth and depth of his abilities and felt privileged to grow up in his enriching presence.

Lyndon felt his greatest accomplishment was his extraordinarily happy marriage to Marion, lasting almost 61 years, and the loving family that followed: four children, four grandchildren and four greatgrandchildren. “Four is the significant number in our lives,” Marion would say.

In the later years of his life, Lyndon pursued fiction writing with great vigour and produced many stories and novels, often taking part in the annual 3-Day Novel contest. Even during his recent illness, he would write when he could, and when that became too difficult, he composed stories in his head, planning how he would write them once he was back at his computer.

Lyndon was a mentor to many people in his life. He happily shared what he knew about writing, music, the arts, food, politics and so much more. His colleagues, friends and family were astonished by his wisdom (his grandchildren wanted to nominate him for a spot on Jeopardy) and how generous he was with his knowledge.

His faith was important, too, and he was involved with the Anglican Church all of his life, and was proud to receive his ODNW medal for Diocesan service, which he wears in the photo you see. He was the author of Pacific Pilgrims: the history of the first one hundred years of the Diocese of New Westminster, the editor of Topic and a long-time supporter of Sorrento Centre.

Lyndon faced the challenges of his recent illness with optimism and grace. He would wish us to thank his dedicated team of physicians and caregivers, including Dr. Killick, Dr. Telio, Dr. Wu and Dr. Chin, as well as his Fraser Health caregivers, home care nurses and the staff of Burnaby Hospital.

He said, “You can’t take it with you, but I am taking decades of memories – memory riches – to last thru eternity.”

We will miss him dearly. We remember his kindness, his humour, his intelligence and his humanity. They remain with us.