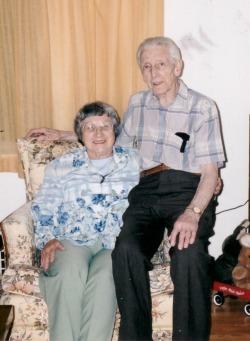 Our beloved mom, Joyce Peel, died September 14, 2016 in Vancouver, BC. Born as Elta Joyce Lane in Mission City, BC to Maude (nee Scott) and Aja Lane, former mayor of Mission, where she lived a full and happy life with her parents and brother, Merril.

With plans to become a doctor, Joyce moved into Vancouver. However, her plans changed along the way and instead she attended St. Paul’s hospital where she trained in nursing, ultimately graduating in 1944 as a registered nurse. Joyce was a natural at nursing and despite the rigors of her job, she still managed to find time to volunteer for St. Paul’s Hospital Auxiliary. Over the years, she was the treasurer, historian and organizer extraordinaire for the auxiliary.

While attending nursing school, Joyce was introduced to a young man, Eric George Peel, on a blind date. That date would prove to be the beginning of a long, loving and laughter-filled relationship between the two, as they married shortly after Joyce graduated from nursing and school and remained dedicated to each other for 68 years before Eric’s death on January 4, 2012. Joyce was also predeceased by brother Merril Lane, sisters-in-law Olive Lane and Elsie Peel and brother-in-law Kenneth Peel.

She is survived by and will be very fondly remember by her loving son, Doug and his wife, Diane, her son Jayme, nieces, Heather Hanson and Holly Rasmus, extended family and friends and two of her many treasured rescued pet cats, Hamish and Emily.

Doug remembers his mom as a very caring, family oriented woman who naturally took care of everyone around her. She had strong traditional ideals and was also known as being an extraordinary record keeper, making notes about everything from who came to Halloween on which year and what candy was eaten, to the Christmas presents she had given or received.

Joyce took great pleasure in gardening in her flower gardens, sewing and entertaining her friends and family. When Doug was a young boy, Joyce wanted to find a way to meet other mothers in the neighbourhood and so she planned and threw a party she dubbed the “12th Night Party” which took place after Christmas. She started out inviting the neighbourhood women and over time the invitations extended to her women friends from work and beyond. Her flair for entertaining was cemented as she continued to throw the “12th Night Parties” for the next forty years. A true legacy maker.

Joyce will be cremated and her ashes will be reunited with her beloved husband, Eric and other family members at the Hatzic Cemetery in Mission, BC.

Eric was a life-long resident of Vancouver, born in the Kitsilano area in 1912 and soon after moved to Marpole with his family. In 1945 Eric and his dad built a home where Joyce and Eric lived and raised their son, Doug. That home still remains with the Peel family.

An important life achievement for Eric was to live to be 100 years old. He was able to see his 100th year, dying in January of 2012 in his home city of Vancouver, B.C.

Eric had a devilish sense of humour and was known for his wry wit and being quick to laugh. He was a creature of habit who held steadfast to his ways. That tenacity helped Eric to overcome the various physical challenges he experienced over his lifetime, never allowing anything to hold him back from doing the things he loved to do. Perhaps these characteristics were born out of necessity, having developed Polio as a youngster and yet still living life to the fullest.

Eric was gifted with a natural technical ability, which was evident in his career as a radio technician, in building his own home, in his amateur radio hobbies (Eric’s call letters are VE7BT) and in his later years, up until the age of 92, as he worked alongside his son building custom designed and fabricated flight and equipment cases for Doug’s company, Dinosaur Cases.

Eric shared his wife, Joyce’s love of animals and between the two of them they rescued numerous cats and fed the local raccoons.

Doug misses his dad everyday, but feels grateful for having had such a good dad to learn from and laugh with. Eric’s story will live on through his son and through his most favorite saying,