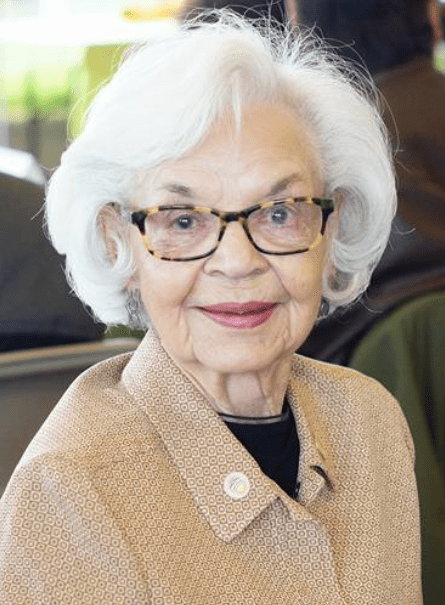 “Do what you can while you’re still standing.”

Lorna May Theresa Gibbs passed away peacefully in Vancouver on July 13th.

Born in Ottawa on August 31, 1931, to Lorne A. Green and Eleanor Chase, she is survived by
her sister Gwen Mathieson of Ontario, with whom she was very close. Predeceased by brother
John, sister-in-law Gloria, and nephews Lorne and Chris. She also leaves her nieces Leslie
(Kevin), Kim (John), Eleanor (Rob), and nephew Tom (Jan). Lorna was friends with so many
and was very close to Maye Soto, to whom she was “Mum,” fellow dog walker Myrna Hastie and
to her neighbour Monica Rosenberg.

Lorna was a resident of Vancouver for over 50 years. She worked in sales and marketing and
retired from Phero Tech Inc. in 1999. The seeds of her community work were planted when she
began advocating on environmental issues affecting Everett Crowley Park and blossomed as
she worked tirelessly as a volunteer in her community, especially in the area of seniors’ needs.
As a former President of Southeast Vancouver Seniors’ Arts and Cultural Society, Chair of the
Seniors Council at South Vancouver Neighbourhood House, Vice President of the SouthVan
Neighbourhood House, Board Member of both Champlain Heights Community Centre and
Killarney Community Centre, a Member of East Fraserlands Committee as well as the VFK
Vision committee, and Vancouver Cross-Cultural Society, Lorna worked towards the betterment
of lives in her neighbourhood, community, and city. In 2012, she was presented with a B.C.
Community Achievement Award as well as the Queen’s Diamond Jubilee Medal. She received the SFU Gerontology Leadership Award in 2016.

In 2017, Lorna was awarded the Civic Volunteer Award at the Vancouver Awards of Excellence.
This year also saw the B.C. Medal of Good Citizenship bestowed on her for being a major
driving force in a 15-year struggle for a seniors centre in southeast Vancouver at the Killarney
Community Centre. This was a dream that came to fruition with the city, province, and federal
governments combining to release $7.5 million in funding.

Former Premier Christy Clark said, “A powerful ambassador for seniors with a natural gift for
bringing people together, Lorna Gibbs was one of the key drivers behind a new seniors’ centre
that makes a real difference for entire families.”

Lorna was truly a force of nature. In her teens, she parachuted from the wing of a Piper Cub at
an Ottawa flying club, an early indication of her grit and determination; the indomitable spirit that
she maintained to the end of her life. She was well-travelled having lived in Europe in early
adulthood and later in life she keenly followed the travels of others, albeit virtually.

Lorna cherished the friendships she made in her community. Many of these were folks she met
through the years while walking her beloved canine companions, at her local community
centres, and through her volunteerism. Her friendships offered the opportunity to enjoy other
cultures and she relished their cuisine, music, and art. They collaborated on two books: Stories
of Southeast Vancouver and Meals and Memories, an illustrated cookbook, published by the
Southeast Vancouver Seniors Arts & Cultural Society.

Thoughtful and generous, Lorna might send a book, a recipe, or some other article because she
thought it would be perfect for the recipient. She was an inquisitive, humourous, passionate,
vibrant and stylish lady. She was genuine in her interest and concern for family, friends,
neighbours, her city, her province, and the planet. Lorna was an inspiration. She was loved by
many and she will be sorely missed.

We wish to thank Dr. Michelle Pereira, for her gentle care of Lorna over many years. Cremation
has taken place. Donations in Lorna’s memory can be made to a seniors’ organization in your
community or the Vancouver Humane Society and will be greatly appreciated. Be kind to each
other and be kind to the planet.

“I have fought the good fight, I have finished the race. I have kept the faith.”