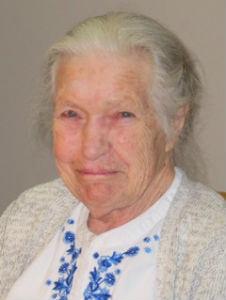 Marilyn Heddle (nee Buchanan) died peacefully at the age of 91 on Friday, January 12th in Vancouver, BC.

She was predeceased by her husband Duncan Walker Heddle, as well as by her only brother Theron Buchanan.

She leaves behind her four children Libby (Les), Peggy (Jim), Murray (Fran), and Kathleen (Mike) and was a much-loved Grandma Boo to her eight grandchildren: Katie, Courtney, Kristyn, Eric, Sean, Robby, Lyndsey and Mac. She will also be missed by her brother Theron’s children Alice, Ann, Terris and Glee; and by her husband Duncan’s four nieces Elaine, Joan, Susan and Sharry.

Marilyn was born in 1926 in the city of Moose Jaw, Saskatchewan to Carson and Willa Buchanan. She spent her entire childhood there along with her younger brother Theron.

As a young woman, she studied at the University of Toronto, where she graduated as a registered dietician. On a train trip to BC with her mother, she fell in love with the Kootenays, and soon after applied for a job at the Trail hospital. While working there she met Duncan Heddle from Nelson, BC. They married in 1956 and settled in Trail, where they started their family, later relocating to Vancouver.

Marilyn created a wonderful home for her four children; she was a fantastic cook and there was always the smell of fresh home baked bread throughout the house every Monday. She kept busy supporting her family in all their various endeavors, while also pursuing her own talents in sewing, crocheting and knitting. She was an avid gardener, creating a true sanctuary of flowers, fruits and vegetables in the backyard on West 14th.

Her beloved dogs – Pixie, Bambi, and Maggie – were also close to her heart.

As per her wishes, no service will be held. In lieu of flowers, consider a donation to the charity of your choice.