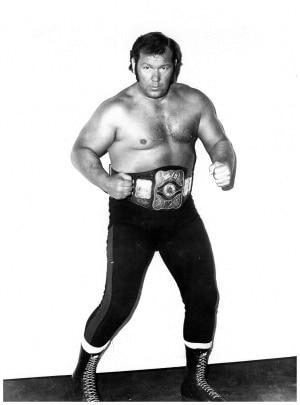 Stanley M. Mykietowich, known to most people as Moose, passed away at home with his family by his side on September 10, 2016. Moose will be missed by countless people in his home community of Vancouver, in Winnipeg where he was born and raised, and throughout the world where he touched many lives through his professional wrestling career.

Moose is missed most deeply by his wife Nancy, his five children, Leanne, Mitchell, Lisa, Margie and Harvey and their families including many grandchildren and great grandchildren, and his extended family including his brother Albert and family.

Moose lived a big life. For over 40 years, Moose inspired and entertained people around the world through his wrestling career.  Over those years he was known as, Stan the Moose, Crusher Morowski, The Claw, and The Black Avenger. He travelled across Canada and internationally to Japan, South Africa and Germany. Moose was a champion; he won many trophies including the Canadian Heavyweight Title and the Canadian Tag-Team Title.

Moose was passionate not only about wrestling but all sports. He was a devoted fan of professional football and an even more dedicated volunteer for limitless kids’ sport leagues in the Vancouver area. Moose believed that sport – any sport – could give kids so much of what they needed in life.

Moose was a big man with an even bigger heart. Though he travelled the world in a very public way, he found a quiet joy in fishing and being with his family.

Cremation has taken place and Moose’s ashes will be scattered by his family in special places in Winnipeg and Vancouver. May you rest in peace Moose.

Some words from Michelle:

“Moose loved being a part of Killarney Minor Hockey and Lacrosse with all of the other parents like Jim, Steve, Janine, Lyle, Dough and Vick and all the other parents and kids like Mark, Brad, Chuck, Tyler, Daryl, Steven and Joey. Moose loved working out with the kids in the gym. He would always be willing to give any kid a ride to the games. Moose loved taking all the kids to the wrestling matches and getting their pictures taken with all the wrestlers.

To his oldest and dearest friend who called weekly throughout his illness, he loved you dearly, Don Leo.”